THE UNDENIABLE TALENT OF DEBORA GIANNONE

THE UNDENIABLE TALENT OF DEBORA GIANNONE 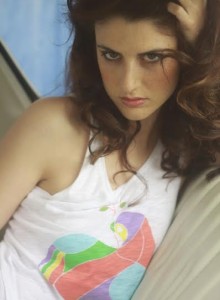 If you’re having trouble balancing your chakras it’s a good thing to have Debora Giannone with you. She’ll tell it like it is and somehow make you feel better and help you believe in yourself again. At least that’s what Debora’s character did for someone in the film clip I saw the other day. It was a very good – very solid scene that showed the kind of control this well-trained actress has.

She has certainly played other roles, a great deal of them for that matter, and with each character she portrays she infuses the role with a sense of reality and a feeling of being human. Even when she plays a manipulative, cold-hearted woman who blackmails someone into being a prostitute, Debora transforms herself fully into that character but gives us glimpses of the character’s humanity.

Debora is a unique actress who has been at it since she was a little girl. She has put herself through years of extensive training with some of the best acting schools and teachers in the world. She also has a resumé filled with countless stage, TV and film performances that have entertained thousands of people and given her the experience that only years of professional acting can give.

Debora is fluent in four languages: French, Italian, German and English, and she is excellent at accents, too. Her New York accent will fool any Brooklynite any day of the week, and her Russian seems to have come right out of Moscow. She not only has a good ear for mimicking the sounds of other cultures but Debora has a great eye, also. She is an accomplished photographer and has several shows of her work coming up. She also dances loves the freedom through moving her body (jazz, modern and ballroom) and sings (alto). Debora is considered by many to be a renaissance woman. Not only is she capable of mastering all the above artistic endeavors, but she is a highly successful model in both print and runway. She has graced the covers of several magazines, including Rockstar, and has modeled for L”Oreal and Dark Beauty Magazine among many others. She has and is most proud of having performed Shakespeare on stage and has been in numerous modern plays. She’s also a lead in the TV series Parole and has been featured in many movies, including Lost Angels. If you can’t wait to see Debora in one of her soon to be released movies, you can see some of her great performances on Youtube.

« So Why Most Diets Fail?
Kraftly ! Sell On Instagram »