All You Need to Know About Kayaks | Girls Mag

All You Need to Know About Kayaks

All You Need to Know About Kayaks 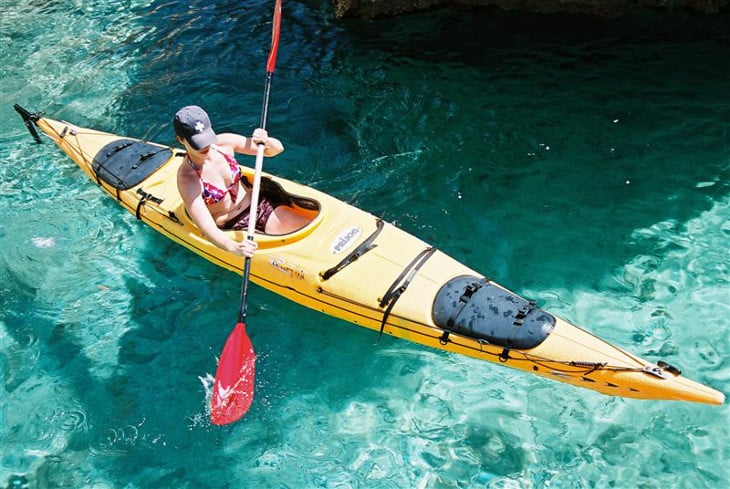 Kayaking is an amazing water sport and is one of the most popular extreme sports in the world. You canenjoy kayaking almost in any place where there is a relatively large water body such as rivers, lakes and evenseas. It is a great way to get a closer view of the beautiful nature since kayaks can get to places that mostother water vessels cannot.

A kayak is basically a small water vessel that is propelled by a double blade paddle. Most people mistake canoe for a fishing kayak. There are several differences between the two. Other than the structure, one major difference is that a canoe has a paddle with one blade while the paddle of a kayak is double-bladed.

HISTORY OF THE KAYAK

The word kayak simply means ‘hunter’s boat’. They are believed to be several thousand years old and werefirst used by the Inuit people to hunt on lakes, rivers and oceans. The first kayaks were made of a wood or awhalebone structural frame wrapped up in animal skin.

In the mid-19the century, kayaking started to spread in Europe as a sport. In 1936, it was introduced to theOlympics and there are now more than ten different kayaking events in the Olympics.

BASIC STRUCTURE OF A KAYAK

The main structural features of a kayak are:

Hull shape: The hull shape determines the stability of the kayak. Flat bottomed hulls are used in recreationalboats and have the most stability on flat waters. Rounded hulls combine stability with speed. Kayaks withv-shaped hulls are the fastest and are able to travel easily on a straight line.

Cockpit: A cockpit is the opening in a kayak that holds the paddler and helps in controlling the kayakespecially when the conditions are rough. A big cockpit is easy to get in and out and offers more cargostorage space.

Chines: This refers to the edges of a boats hull that are below the water surface. Boats with harderchinesare more about performance. Kayaks with hard chines can quickly turn and respond promptly to hipmovements. Kayaks with soft chines are great for rocky water as they are more forgiving while those withhard chines perform well in deeper water.

The evolution of kayaks has brought about tones of different kayaks each with minor structural variations.As a result, there are multiple ways to classify kayaks. There are normal kayaks and hybrid kayaks where thehybrids are essentially canoes propelled using double bladed paddles. Kayaks are also distinguisheddepending on the paddlers sitting position. There are sit-in kayaks where the cockpit is inside the kayak’sstructure and sit-on-top kayaks where the sitting structure is on top of the kayak.

They are made for a casual kayaker and are easy to use. They are rather stable in the water and are used bybeginners or for photography and a bit of fishing. They are best for a gentle ride in protected waterssuch asa small lake, a flatwater river or the shallow parts of an ocean. They are not good for places with strongwinds or currents.

They have a wider beam for stability and larger cockpit to enable the paddler to easily get in or out. Theyrange from 10 to 12 feet and usually have a small storage since they are not intended for long trips into thewater.Most of the kayaks currently being sold in the world are recreational kayaks.

They are designed for one or several paddlers (two or three) travelling into the open waters. They normallyhave large cargo storage and are quite stable in the water. However, they are usually not easilymanoeuvrable. They have longer waterlines than most other kayaks.

Under this category, there are the sit-on-top kayaks. They are made of an unsinkable hull and are majorlyused for leisure. They are much slower and wider than normal kayaks. A sit-on-top kayak can be found in 1-4paddler variations.

These are specially designed for surfing. They have flat bottoms and the edges are hard just like surf boards.The design enables them to be used on ocean waves. There are two main varieties; high performance andinternational classic. The high-performance surf kayaks are designed for speed and dynamic maneuverability while the international classic is meant for a smoother ride.

A variation of the normal surf kayaks with closed cockpits is the wave ski which is a sit-on-top surf kayak. It isquite similar to a normal surfboard.They are typically made of fiberglass or hardened plastic.

They are made to be used in rivers and streams particularly those with fast moving water. They canwithstand impact on rocks without leaking. Different types of whitewater kayaks include:

Long boats: They have a length of 9 feet or more. They are quite fast but also challenging as they are harderto turn.

Creek boats: They measure from 7.5 feet to 9 feet and have a large volume. They are made for paddlingthrough steep waters.

River runners: They are similar to creek boats but are much faster and easier to control and as such are greatboats for beginners who are still learning how to kayak.

Playful river runner: They basically are river runners but with tweaked out features so as to allow for moreplay. They come in different shapes.

Freestyle boats: They are 6.5 feet or shorter and are meant for play and doing tricks. They are normally usedin play parks. Only experienced kayakers can paddle them down a river.

Kayaking can be done as a hobby, a competitive sport or as a fun activity on holidaysThere are different types of kayaking depending on the purpose and location. They include kayak touring (recreational kayaking), sea kayaking, kayak surfing, white water kayaking, and freestyle kayaking andcompetitive kayaking.

Before getting a kayak and hitting the waters it is best to determine your purpose of kayaking so as to choose the best kayak for a perfect experience.