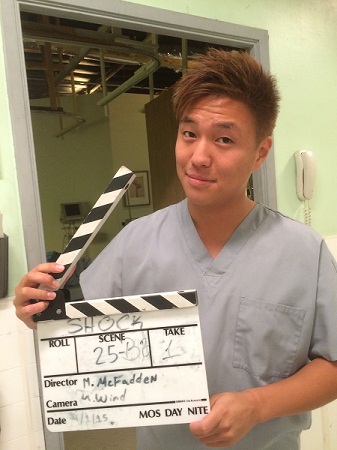 We recently caught up with extremely talented and intelligent actor Obie Sho from Japan who is doing some amazing things in the world of showbiz. He was happy to share with us, his experiences in acting growing up, his achievements and plans for the future in entertainment. Here is what he had to share with the readers:

Please introduce yourself to the readers and how and when you first got into performing?

Howdy! My name is Obie Sho and I’m an actor from Japan, based in Los Angeles. I’ve been working on my career for quite some time and officially starting my acting career in Las Vegas. I was born in Tokyo and raised in the southern small island of “Yakushima”, which is the first place in Japan to be chosen as a World Natural Heritage Site It is a huge country side. While I had high school life in Yakushima, I came 2nd in an all Japanese English speech contest and received an award from my home prefecture. This special credit was where I discovered my passion for acting. Growing up in Yakushima, being in Hollywood has always been the “dream world” for me. Since then, I have been full time pursuing a career in entertainment. I have actively appeared in several films and theater shows in lead and principal roles both in Los Angeles and Las Vegas. I have also been in a Braun razor commercial and was the organizer in charge of the international sketch group “So, What Happened To Me Yesterday”. I become a part of “Team HARA” from America’s Got Talent 2016.” There are currently several upcoming projects in the works, which hopefully I can share more details of shortly.

What inspired you to get into the entertainment industry?

Entertainment has always been my inspiration. As I mentioned, back in high school, I had to perform twice at the All-Japan English Speech Competition. Elimination round, actually didn’t put any pressure on me and I passed “okay”. However, the final round really did make me freak out. There were way more audiences, and the mood that they brought made me realize deeply the true “final” performance. I was so nervous, more than I had ever been before. While I was waiting my turn to be on stage for my performance, I saw a couple of folks snoozing in front of another performer. This is what triggered something in me after I saw this. On stage I took a bow, and started my speech. I really don’t remember how I performed, but I discovered a couple of people snoozing that woke up through my performance. I was numb and in a zone unconsciously enjoying it without any stress. The last line came out from my mouth. right after this and I received a huge applause from the audience. I received second prize in all of the Japan division, which was huge. I think entertainment is one of those beautiful things that expresses the arts through people that makes them something special. I have such huge gratitude to this universe for the existence of the performing arts. I have never felt special yet for my English quality, but for sure, this experience built my self-esteem.

What kind of training have you had, if any?

I started in college 101 class and officially learned film acting tips through Ryan R.William who was the award winner from BackStage Reader’s Choice 2014, while I was in Las Vegas. I have also recently taken classes at LAPAC (Los Angeles Performing Arts Conservatory) and went through most of methods, improv and some scene studies. This year, I am planning to start training in singing and dancing for my new promotional campaign as well.

What has been your favorite role to play so far?

I love to play straight forward roles. Even though I have some experience with comedy, it’s very different from the Japanese style and I still took a while to master it. So, I do feel excitement especially when I get roles in drama with America’s background and taste and to get to express my character through me. I also like fantasy stories, so one day, if I do have the chance to be part of something like “Fantastic Beasts” or “Star Wars” as a principal role, I would definitely be fulfilled.

What projects do you have coming up?

I can’t really say as of now, because of the contract I have made with each production, but there is still a couple of films and commercials that haven’t come up yet, that I’m looking forward to. Also, I have a one-man theatre project remake version of my original speech monologue which I did 5 years ago back in Japan. The story will be about “Yakushima” himself, trying to express his message to people about the concern for this universe through human society. It will be describing the beautiful green atmosphere with rich deep forests such as the “Princess-Mononoke” from Hayao Miyazaki’s film, that makes us respect and be humbled by their deep natural circumstance. It’s not a religious related story but has a fantasy touch. I plan on working on rewriting the process for this script and plan to perform in the next two years and collaborate in either projection mapping or anime.

Tom Hanks, Jake Gyllenhal, or Matt Damon would definitely be magnificent. I also have to include Jessica Alba in this (smiles). And of course, one day I would love to work with Nicholas Cage in the Las Vegas film community. It would also be amazing working in a film with Robert Downey Jr. as Tony Stark!

What are your plans for the future?

There are many many plans that I want for my dream, but I plan to work on singing and dancing to gain a new way of expression. However, I will always keep my main credit as an actor and be cast in more Hollywood films and TV series. I look forward to visiting Japan with continued success in Hollywood and represent my home island and make them proud. I also look forward to presenting to the world, my one-man show performance which will be really amazing. For the last part of my life, it would be great to have helped contribute something good to this universe during my time, especially  Japan and America. I know my answer might seem vague now, but I’m looking forward to focusing each goal to fulfill later on!

What is your advice to aspiring performers?

I believe to become a good actor depends on your self-esteem. Even though you think you are not an actor by your judgment, to others you may be brilliant. Sometimes a normal stranger who is super drunk can play a role very well, much more than a trained actor who has learned methods for years! So my honest opinion is, everyone could become an actor and it only depends on how strong your passion is and the pressure that you can carry. Also the person who can shine in the moment or in that scene, is definitely the star in this industry. I do assume in order to shine from within, without self esteem it is totally impossible. The method of acting is important, but living your life also makes you respect yourself. This is what I tell myself  in order to move on to the next step.

« If I Can Cook It So Can You !
NeiLite Area Manager »