We had an opportunity to interview world-renowned actress born in the UK. Known for her vivid style, bright eyes and big smile.Yes she is Hayley Angela Gilbert talk about her latest role in a music video Song sunrise. 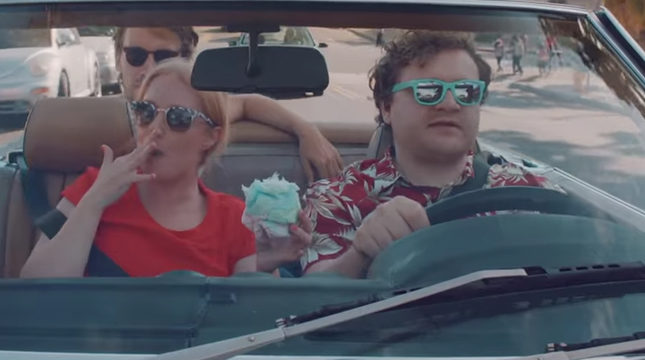 Girlsmag: First of all please introduce yourself to our readers?

Well, I am an actress and a comedian. I have toured the UK in theatre productions, was the lead cast member in Crime Team and am now making my way in the US with films, television and my latest music video release ‘Sunrise’, playing the lead female.

Girlsmag:Describe yourself in five words as an actress ?

Girlsmag:Our readers would like to know about your latest role in Yuksek’s – Sunrise ?

I was the lead actress, in Yuksek’s latest music video titled Sunrise. I play the girlfriend. They are too odd characters who are head over the heels in love with each other and eat junk food all day. The music video shows their daily life, with Yuksek being a ghostly figure in the background playing his guitar. The couple think they are alone and are all lovey to each other. They go out for a car ride to watch the sunset and realize Yuksek has been following them the whole time. Its a nice little video and was fun to film. I was eating sweets, chocolates, breakfasts all day. I think I put on a few extra pounds.

Girlsmag:What kind of response are you expecting from this video?

So far the music video has 10,000 views and its only been out a few days, so thats good. The video gives me an opportunity to show my acting because you have no words with music video’s its all about expressions. Someone gave me a great tip years ago, it was to watch silent films. Because the actors had to tell a story and how they felt with no words. That is acting. Then you add the words. A viewer should be able to watch you and now what is going on in the scene without words.

Girlsmag:Any particular target you want to achieve in this industry?

Television. Thats 2017. There are a few projects I’m in talks about but you always have to wait for the green light and possibly a film. But I really want to go back into Television and work with an ongoing character that you can develop.

Girlsmag:Are you working on any other project?

I have just done another music video for Ephwurd’s latest song ‘Vibrations’, for that I play a mother. I always find it weird playing a mother when I don’t have kids myself, but I have dogs, they are my kids. Its a funny scene, where the mother is telling her kids off. They are stuck in traffic for hours and the kids are fighting. When ever the mother turns her back to her husband who is driving he is checking out the hot chicks in the car next to us. Finally she notices and as you can imagine not a happy woman. That should be out quite shortly, so looking forward to watching that. It should be funny.

Girlsmag:Any specific kind of role you want to play at least once in your career?

A detective. I like CSI and X Files. I would like to do a different kind of crime series with a touch of comedy. I like watching crime investigations so as true crimes. Plus crimes shows have everything going for them. They have action, suspense, drama and romance.

There are many layers to the character of a detective, because the have this professional authoritative exterior, but deep down how does everything effect them, the day to day crime and their personal life.

Honestly, there are so many programs I would love to work on. I would love to do Downton Abbey or American Horror Stories. So much good TV and challenging roles to play.