BioLift: A Beauty Product that is a Better Alternative to Botox | Girls Mag

BioLift: A Beauty Product that is a Better Alternative to Botox

BioLift: A Beauty Product that is a Better Alternative to Botox 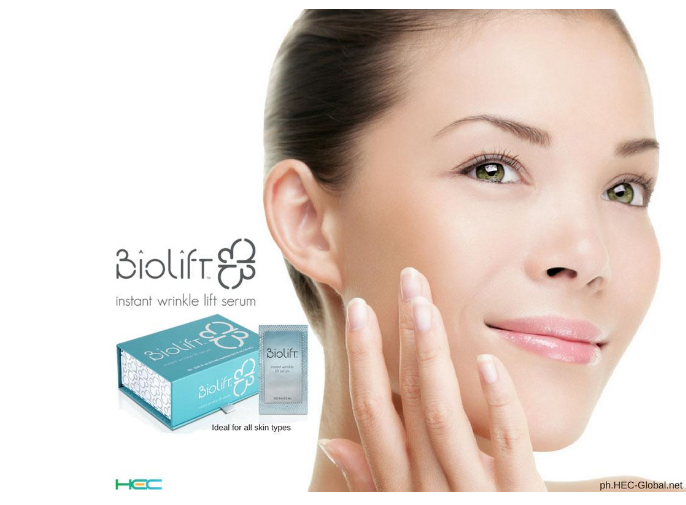 Botulinum toxin (BTX) – In the world of cosmetic science, BTX is a process of regaining youthful beauty by reducing or perhaps eliminating facial wrinkles. This is injected into the muscles under facial wrinkles and “freezes” the muscles. It smoothness the overlying skin making it younger and wrinkle-free. The effect becomes visible as early as three days and lasts for three to four months. The muscle returns to its normal state after such period. It’s a beauty regimen that others consider as the easiest way to maintain a beautiful, wrinkle-free and smooth skin. Popularly known as Botox, this procedure brings not just beauty. It may also be used for some therapeutic purposes such as treatment for severe underarm sweating, muscle stiffness, chronic migraine and urinary incontinence. So it’s not just about beauty, it has lots of health benefits, too. However, Botox may also have negative side effects if not properly injected. If BTX is injected to a wrong muscle group, it may lead to muscle paralysis. Choosing this regimen may be very costly, too. Despite having serious effects on health, this procedure is significantly popular in the market and in different industries most especially in the showbiz industry and the media were beautiful and young skin is a major asset.

According to an interview with the doctor of the stars, Dr. Vickie Belo, famous actors, actresses, and newscasters with porcelain-like face undergo Botox. She also mentioned that more than 20 million individuals trust Botox to keep their appearance consistent with their lifestyle. Believe it or not, those beautiful and youthful faces make watching TV more entertaining. Very eye catching to the audience and of course, it adds up to the confidence to have that smooth skin.

Would you believe that one could have the Botox effect without getting through needles or cuts? BioLift is an instant wrinkle lift serum. Effects could be noticed in just minutes after application. The secret behind this powerful serum is its combination of botanical extracts, complex minerals, and the revolutionary anti-aging peptide Argireline. All these in one serum can deliver dramatic age-defying results.

What causes wrinkles and frown lines then? Muscle contraction is a big factor to those ugly wrinkles. During the muscle contraction, a super lipid releases a neurotransmitter to the synapses, a point at which a nervous impulse passes from one neuron to another, which then signals the muscle to move. During the final stages called the exocytosis, SNARE complex, composed of three proteins are essential for such movement.

To emphasize on the primary use of the main ingredient of BioLift, Argireline is the trade name for an ingredient called acetyl hexapeptide-3. It is made by Lipotec, which is based in Barcelona, Spain. Said company discovered that acetyl hexapeptide mimics one of the three proteins called SNARE complex, and as a result can destabilize it. A destabilized SNARE won’t function. Hence, there would be no muscle contraction or movement. If there were no muscle movement, consequently, there would be no wrinkles. Its secret lies in its peptides or the chains of amino acids causing facial muscles contract with less force. Thus less or no movement at all prevents the skin from forming creases or the wrinkles.

Based on an independent study conducted by a Spanish university which was published in the International Journal of Cosmetic Science, it says that 10% concentration of Argireline reduced wrinkles by 30% over 30 days. Consistent use over a long period of time can result in dramatic changes. Here’s the answer to remove those fine lines crowding around the forehead and eyes.

Argireline is the new beauty agent used by hundreds of manufacturers in the industry. It works in a similar way with Botox. With BioLift, there’s no need for expensive injections, just a beauty serum to apply on the face and it will do its work in just minutes. Once the skin absorbs the serum, Argireline inhibits the reactions that cause facial muscles to contract or move. When smiling or frowning, facial muscles are less likely to crease and form wrinkles. It should be used consistently over a long period if time to see the dramatic effects on the wrinkles.

Gaining back your youthful beauty can be tedious and luxurious. It can be expensive as well such as plastic surgery and Botox. Honestly speaking, nothing can hinder someone to regain a youthful and smooth skin no matter how difficult it may be. Plastic surgery and Botox – said procedures may be very risky and stressful because of the recovery time and the health risks. Why worry yourself under the knife and syringes? Argireline comes with cream or serum that can be easily applied on the skin. With its powerful effect on the skin, it’s definitely the number one alternative to Botox.

Hundreds of products are already available in the market to address the growing concern of wrinkles. The discovery of Argireline is indeed a milestone in the cosmetics industry. Multi-Level Marketing approach in the Philippines has embraced selling products containing Argireline. Hence, positive results are directly dispersed through word of mouth and presentation of living proofs how effective such products could be.

To sum up the benefits of Argireline as the best alternative to Botox, here are some points to ponder.

To maintain a lasting smooth and glowing skin, one should strictly follow this beauty regimen.

Looking at personalities with porcelain-like skin especially on the face could be really entertaining and fixating to look at. Having one can be really amazing and rewarding. It’s a wonderful feeling to see your face glow and free from fine lines and creases. Thanks to BioLift, achieving this dream could be easy. Direct selling and online businesses have also helped propagate the presence of this alternative to Botox and the number of users increases day by day.