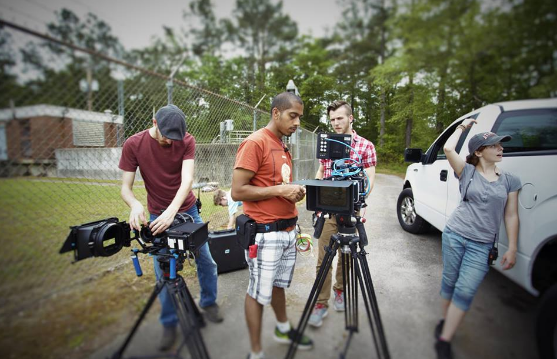 If you’ve ever been on a movie set then you know how focused the filmmakers are. When the director says “Action,” each person concentrates all his or her focus on their particular craft and the whole crew moves as if it is one entity. Each job is extremely important or it just wouldn’t be there.

If you watch the camera crew you’ll notice that there are several people hovering around the camera, each one tending to something different and yet all working in unison to get the best shot possible. There is the camera operator, the 1st camera assistant and the 2nd camera assistant, along with the Director of Cinematography, who is responsible for the lighting and the overall shot itself. Sharath Chandra has done all of these jobs and he has not only done them in short films but has worked on many feature-length motion pictures with experienced camera crews.

Sharath began working on films as a focus puller and camera assistant and has since contributed to the success of many short films and feature films as assistant camera person, editor, writer, director and producer. He obviously loves film and whenever he gets the chance, he makes his own short films as writer, director and editor. Some of them you may have seen: Emotion, First Refusal, Operation Baby and The Look are just a few of some of his highly praised films.

The features he’s worked on as a member of the camera crew are, Shake Off The World, Borderland, with Peter Fonda and Bruce Dern, Regen, Forced to Kill, Cozmo, All Is Vanity, Pale Horse, The Unbidden, Buddy Solitaire and Cold. Not bad for a guy from India who studied filmmaking in the Philippines and then came to Hollywood and enrolled in the legendary New York Film Academy.

Sharath is a serious filmmaker who is highly energetic and highly intelligent. He sees filmmaking as an art and also as a craft that has become his vocation. If you look at his work, whether it’s a feature film or a short, you can clearly see the artistic values that Sharath has added, and you can certainly understand the craft and the skill that he has accumulated through years of hard work and experience. Sharath, like others who take their work seriously, only gets better each time he steps onto a movie set.