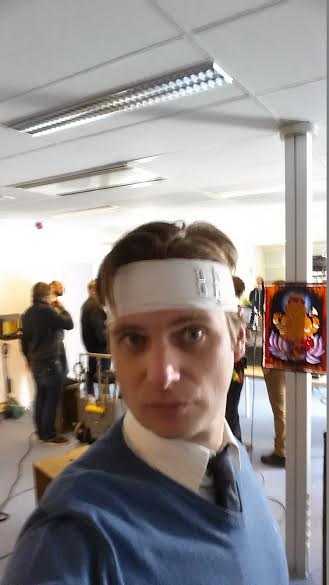 Some people have all the luck – and apparently, all the talent, too. Pierre Macko fits that bill perfectly. All the luck because everywhere we look – there he is, in short movies, on the TV, in feature films and in television commercials. He’s been in so many commercials that I lost count, even after I took off my shoes to help me count. If I didn’t like him so much as an actor, I would have moved to another country so I wouldn’t have to see his nice face so much.

Of course, that probably wouldn’t help either. I just heard that his commercials, especially the Royco Soup spots, are now being shown in France, Belgium and Germany. It will only be a matter of time before Pierre and those ads conquer all of Europe. Besides many others, he also did a commercial for the national health care system in Belgium called Solidaris. You can’t miss him in it…he’s the good-looking one.

A lot of professional actors are doing commercials nowadays. I was going to say being dragged into doing commercials but they really don’t need to be coaxed or cajoled or coerced or forced (you get the point by now), because commercials can be quite lucrative. They can actually provide an actor with a steady and quite tidy income that can pay the rent and bills in between acting in films or stage productions. Plus, says Pierre, many commercials have big budgets and they’re fun to do. And the really nice thing about those 30-second mini-movies is that they give actors the kind of exposure that they really can’t get anywhere else.

Pierre sees the benefits of the commercial industry and it has paid off handsomely in terms of the recognition he gets when he just walks down the street. He is instantly recognized by people who have seen his commercials. “You’re that guy in that commercial!” “Hey, I saw you the other night on TV.” That’s certainly one of the fun parts for Pierre, along with the acting, of course, and doing his own stunts, which he got to do on the Royco commercials.

This year has just barely begun and Pierre is already extremely busy. The commercials and the short films of course, keep him constantly on the move, and he has some full-length movies coming up also. Since it looks like Pierre is not going to stop any time soon, maybe I’ll just get used to the idea that his face will always be around, whether it’s on TV, commercials or feature films. Life might be easier for me that way.